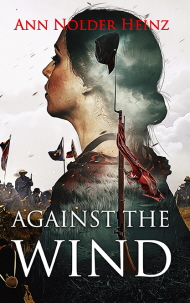 Dr. Gwendolyn Pickering has a fierce passion for helping society’s most vulnerable, a passion that led her to become one of America’s earliest female physicians. The same protective instinct has prompted her to accept the marriage proposal of a sensitive but damaged artist whose self-destructive actions have brought him to the brink of ruin and back again. Now the Civil War is raging, and he is fighting in Virginia as a first lieutenant in the Union Army. When Gwen receives word that he has been captured and is being held as a prisoner of war in Richmond’s notorious Libby Prison, she vows to rescue him and bring him home.

Meanwhile, the commander of Union troops in Virginia, General Benjamin Butler, is seeking to establish secret communications with a network of Unionist sympathizers led by Miss Elizabeth Van Lew, a Richmond lady of impeccable social credentials who has communicated her willingness to act as his spy. Miss Van Lew is also known for engineering escapes from Libby Prison. Gwen agrees to undertake General Butler’s dangerous mission as long as he gives her the freedom to also enlist Miss Van Lew’s help in freeing her fiancé.

What begins as a straightforward rescue mission soon transforms into a struggle for Gwen’s own freedom. With the war raging around her, she is forced into hiding while inimical forces seek to hunt her down. She must utilize every last ounce of her intellect and determination to navigate the seemingly endless barriers that appear before her. In the process, she discovers some important lessons about her own flawed nature as well as what it means to love truly and completely.

Click here to read an excerpt from Against the Wind.