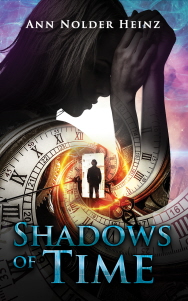 Madeline (Maddie) Blake is not like other PIs. She has a unique gift, the ability under certain circumstances to bridge time and relive events that have already happened. When a heartbroken mother calls from Seattle and begs for her help in locating her missing daughter, Maddie cannot refuse. Yet it soon becomes apparent that someone will go to any length to prevent her from taking the case.

Maddie’s grit and determination prevail, and she arrives in Seattle only to discover that more is at stake in the wealthy Hallowell house than a simple abduction. Questions abound. Why is the girl’s father so hostile to Maddie’s involvement? It is 1979, the Cold War is at its zenith, and he shows more passion over a famous Soviet dissident than he does in finding his daughter. Why is a man murdered and his body dumped on the curb in front of his house? Why does he summon a group of colleagues to a secret meeting in the middle of the night in what looks to Maddie like a full-blown conspiracy somehow tied to the communist regime in Russia? Why has a self-described freelance journalist ingratiated himself into the household and into Maddie’s investigation? Who is friend and who foe?

As Maddie gets closer to the truth about what happened, she finds herself in ever increasing danger. Her psychic gift takes her from the city to the mountains to the coast and onto a Russian fishing trawler far out in the Pacific Ocean. Faced with the most horrendous odds she has ever encountered, she must use every last physical and emotional resource in order to survive and unravel the skein of lies and ambitions that lie at the heart of her case.

Click here to read an excerpt from Shadows of Time